We are a discipleship movement shaped for mission

On 22nd July 2016 I went on an enjoyable 12 mile walk with a friend called Jayne. It was part of the Imber Perimeter Walk on Salisbury Plain. Jayne was about to celebrate a significant birthday and she'd set herself a challenge of walking the whole Imber Walk by her birthday. She invited friends to join in for various sections.   So Jayne and I spent an enjoyable afternoon tramping along chatting about all manner of things. Some silly, some serious. 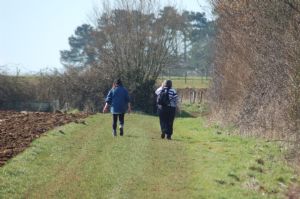 It proved to be the last significant walk I ever did, as in early September 2016 my life changed when I was suddenly taken ill. I don’t need to tell the whole history. But the illness left me with a significant level of paralysis in my right leg. My long-distance walking days are over I spent 3 months in hospital and over a year recuperating at home.

During this time of recuperation, I remember being visited by a fellow minister. We had a chat as you do and then out of the blue, he said to me “So David. How are things between you and God?”

The question threw me at first. But I was able to answer it easily and truthfully “Things between me and God are fine.” They were, and they are.

I think my minister friend expected to me to be angry at God for what had happened.  But anger at God is not something I ever experienced. In fact, more than anything during my illness I came to walk closer to God than ever before. And in part that was because God sent people to accompany me on that dark time in my life. Fellow pilgrims on the journey. People to shine the Christ light. People to bring hope.

One of the stories of Jesus in the Bible takes place on a road between Jerusalem and a village of Emmaus a few miles outside the city. The story has two of Jesus disciples trudging along the road on the first Easter Sunday evening. The two disciples are downcast because they have seen a story end badly a couple of days ago. They had seen Jesus die on a cross and be laid in a grave.

They are joined by a stranger. The stranger is in fact Jesus, but they do not recognise him. The stranger encourages them to talk and they tell him all that has happened. Having heard their story Jesus takes it up from where they left off. And he shows them how his death, far from being the end of the story was only the end of a chapter and a whole new story has now started with his resurrection. A whole new story of eternal life. Of hope.

Many of us walk along our own Emmaus road from time to time, dejected, downcast, rejected. But during those times we are not alone. Jesus is with us. We might not recognise him, but he is there. Often, he is there through the presence of someone else. Someone we might know well; someone who might come as a surprise to us. Jesus is there through them. And when we walk alongside someone who is glad of our company or in need of our company, we are being Jesus to them.

We are pilgrims on a journey,
and companions on the road;
we are here to help each other
walk the mile and bear the load.

*The photo at the top of this blog is of my wife and our friend Jayne on another occasion walking along chatting. I love this photo. Fellow pilgrims on a journey.